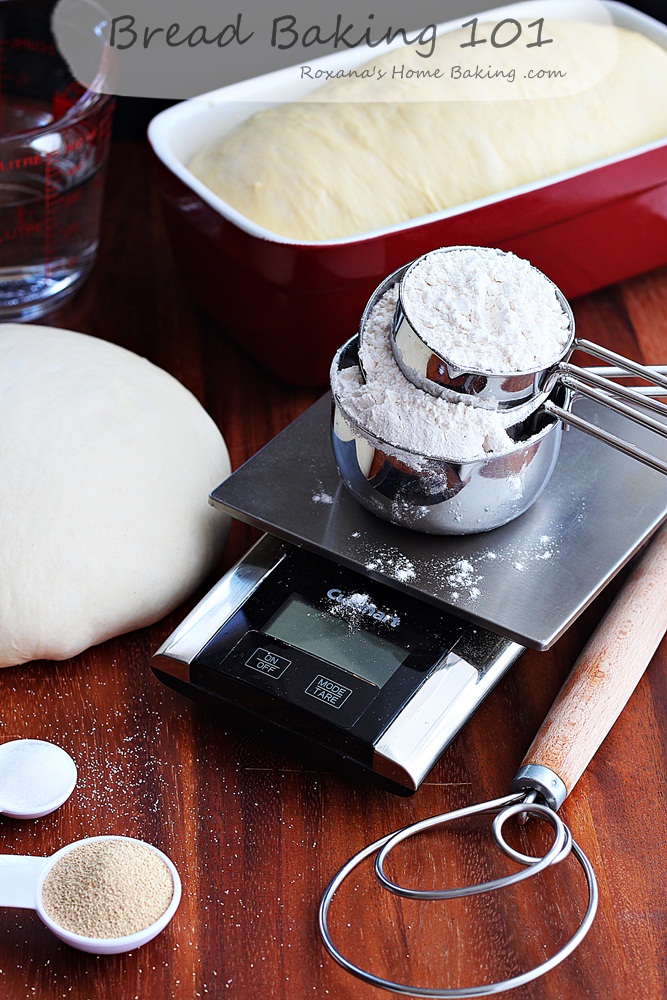 As promised, I’m back with another post, part 2 of my Bread Baking 101 series. Today I’m going to talk about the commonly used ingredients. Since I don’t want to turn this into a mile long post I’m going to divide it in three parts : liquid, salt, sugar and fat today, all about flour and yeast in two other posts. This way, you have time to digest every single piece of information I’m going to share with you. 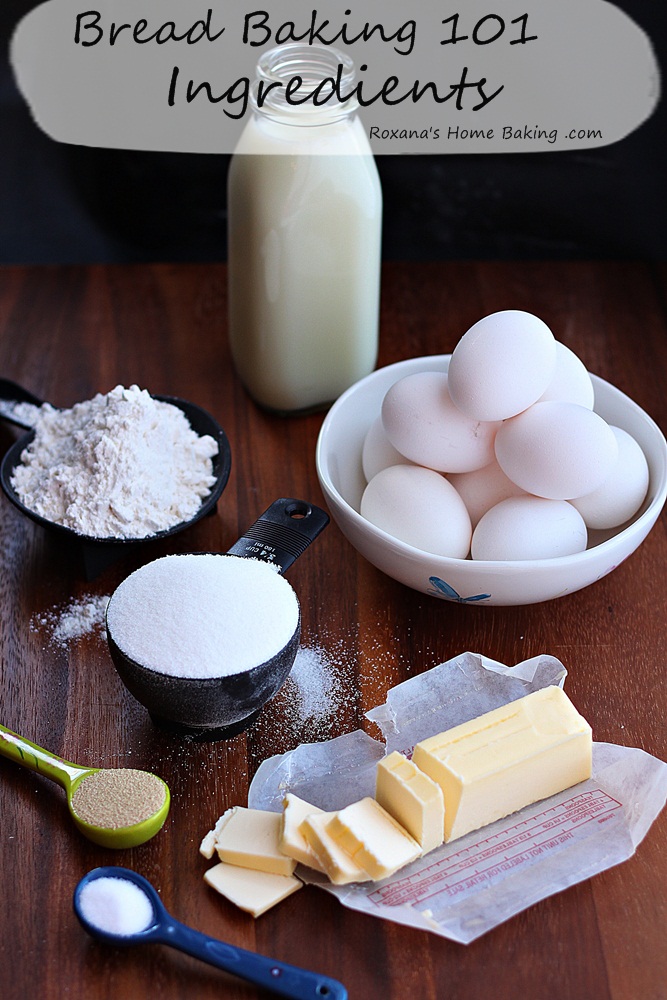 Water is the most commonly used liquid ingredient in bread. It is one of the ingredients that it is indispensable, just like flour.

Water, in contact with flour, causes the gluten to form. It also helps dissolving other ingredients like sugar, salt and it pays a very important role in yeast fermentation.

Water should be lukewarm, around 100F  – you should feel it warm on the inside of your wrist (get an instant thermometer if needed). Some bakers suggest to boil the water and let it cook until it reaches 100F. I do not always have the patience to do so but I do filter my water, using a simple Brita filter (which I use for drinking anyhow). This way I make sure I remove the impurities from the tap water.

Mineral water is not recommended in bread making since the minerals found in water will slow down the fermentation.

Breads made just with water will turn out with a crispy crust and a chewy texture. Think country bread.

Beside water, milk is the second most used liquid ingredient. May it be full fat, skimmed or fat free, it’s totally up to you. In bread recipes the fat percentage is not as important as in pastries.

Milk is used to add flavor. It enriches the dough and gives the bread a creamy color, soft crumb and a golden crust.

Just like water, milk used in bread recipes, especially when mixed directly with yeast must be lukewarm.

Although there is just one bread that is salt-less, Tuscan Bread, all other bread recipes call for salt. Salt is a very important ingredient in bread making. It’s used to enhance the flavor and also to control the fermentation, strengthening the gluten and preventing the dough from rising too much/blooming and collapsing during baking.

When adding salt you have to keep in mind one simple rule – keep it away from yeast. If sugar helps the yeast fermentation, the salt will kill it.

Usually the salt is mixed with the flour, or with the rest of the ingredients, after the yeast has been dissolved.

Fine table salt, sea salt or kosher salt can be used in bread recipes. Try not to use coarse salt as it takes longer to dissolve.

Sugar is one of the optional ingredients in bread making. Although some say that it’s best to add a pinch of sugar when dissolving the yeast I think very well  the bread will survive without it. Actually if you’ve been a regular follower of this blog than you know I almost never proof yeast with sugar. I prefer to let it dissolve on its own, even if it takes 3-5 more minutes, but I know my bread will have more flavor if I do so.

I do, and I have to admit, use a little bit of sugar in lots of bread recipes but I mix it once the yeast has been dissolved, even if it is a savory bread. Sugar, in small quantities prevents the bread from going stale faster (not that it lasts that long anyhow). It also somehow influences the color of the crust. The more sugar a bread calls for, the darker the crust will be. Usually about 1-3 tbsp are called per 4 cups of flour but you will find bread recipes that call for up to a cup or even slightly more per 4 cups of flour.

Keep in mind that even tho a little bit of sugar speeds up the fermentation process, too much sugar will stop it. Contrary to lots of believes, bread recipes that call for about 1 cup of sugar (like this Romanian swirl bread) will take longer to rise than those using 1/4 cup.

Just like sugar, these ingredients are optional in bread recipes. They are used to enrich the flavor of the bread and also to give a moist cake-like texture and a very soft crust.  Think brioche or challah.

Eggs add color, improve the texture and give the bread a rich flavor. There’s one downside when adding eggs to breads: it drys out faster, that’s why almost all the recipes that call for eggs call for butter or oil as well, to help preserve the freshness.

Butter is often used in bread recipes. It’s usually diced and softened or melted, before adding it to the dough.

Olive oil is one of the most popular used oil, especially in Italian breads. Sunflower or grapeseed oil is a very good (cholesterol-free) alternative to melted butter.

In small amount, fat helps the elasticity of the bread, but if added in larger amounts, just like sugar, it will slow down the action of the yeast, increasing the rising time.

That’s all for today, see you tomorrow when I’m going to talk about flour and how to correctly measure it. If you have questions leave them in the comments below. 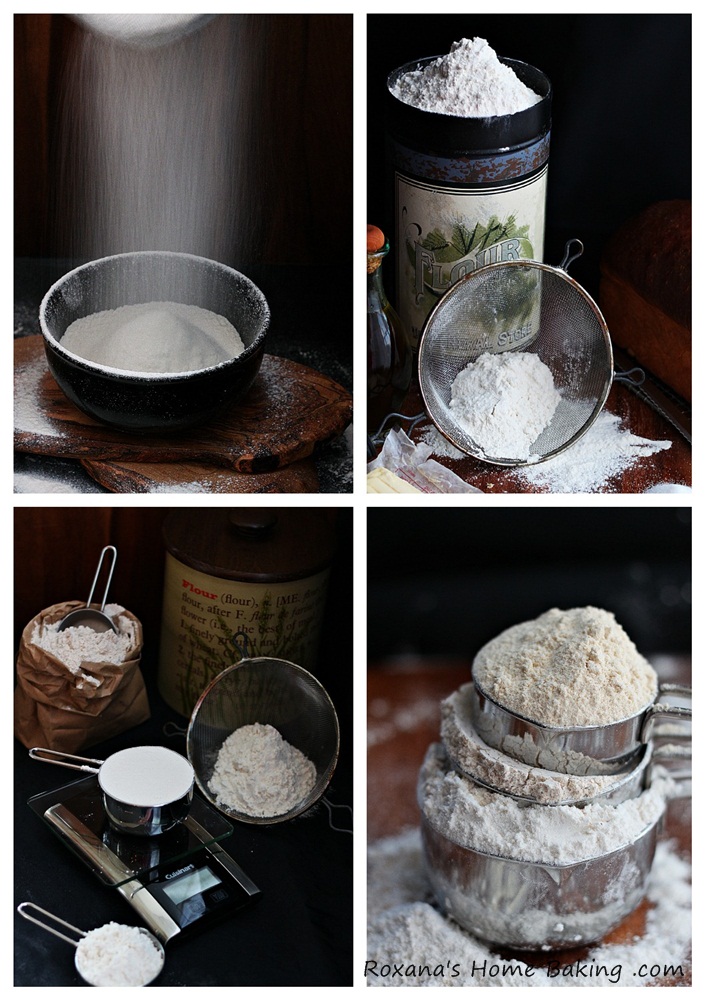