Everyone deserves a special treat on their birthday and this over-the-top vanilla bean cake topped with piles of fluffy vanilla bean frosting and colorful sprinkles makes your day extra special! 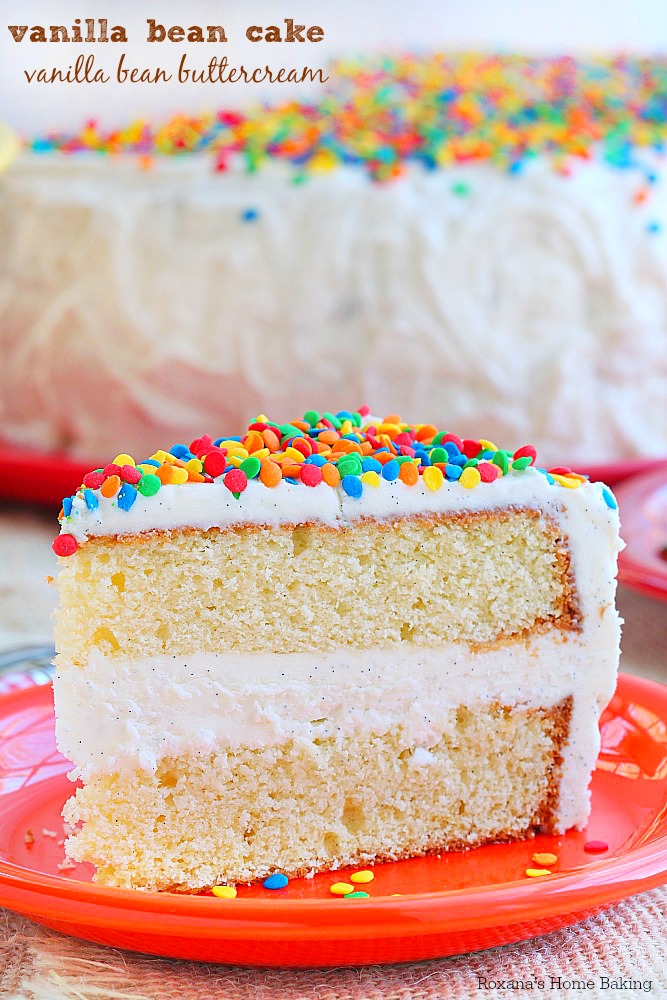 When asked what cake she would like for her birthday, Tiffany quickly replied – a colorful one! Of course! As if I had other options, but it was nice to ask her before dusting the round cake pans, which I don’t really use that often.

They are on the highest shelf in the cupboard. It requires me to get the step-stool, stretch my arms as much as I can and get the pans out. I swear, the previous owners must have been at least 6feet tall. Half of my cupboards store stuff I use only once or twice a year because it’s so hard to get them out and put them back in.

Anyhow, back to this lovely vanilla bean cake I made for my daughter’s birthday! You gotta have a sprinkle loaded cake for your kids birthday, and actually for any party.

No matter how old are you, a bite into a sprinkles loaded cake is sure to put a smile on your face. 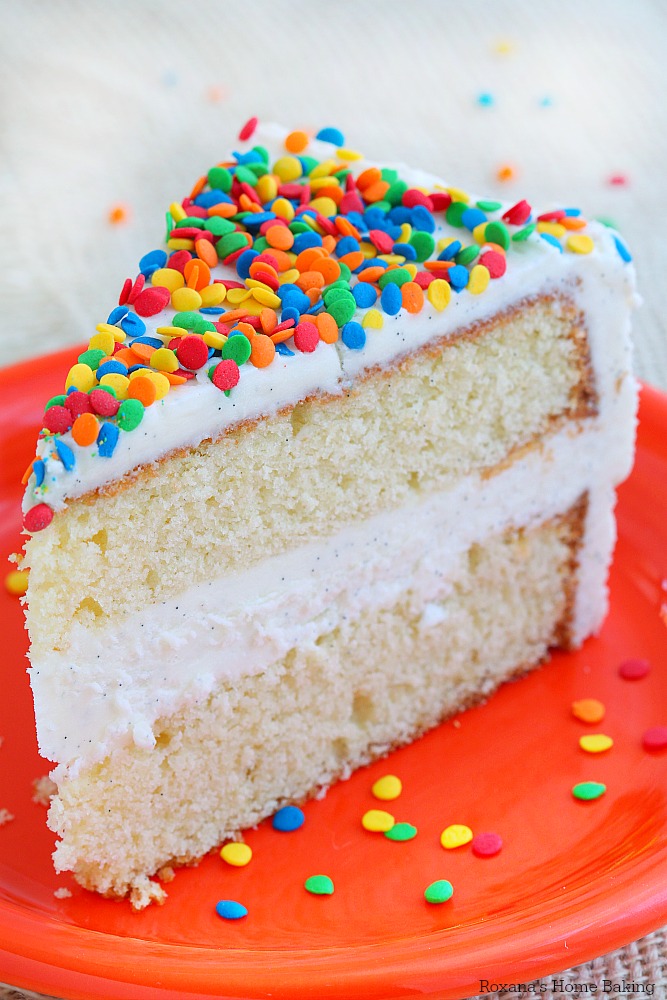 This vanilla bean cake was my back-up plan for Tiffany’s birthday. My first choice was my favorite triple chocolate cake and I knew there would be some guests who prefer a white cake.  Turns out, when you have 17 kids plus parents, you need a back-up to your back-up cake. I was lucky some of the parents said no to the cake. There were no crumbs left.

Actually, I had to re-do both cakes so I can take pictures since I didn’t do it before the party. Not that my family and some of the guests complained when I called them few days later to come over for more cake.

The cake itself is my twist on the classic white cake. It’s moist, light and tender, but in the same time sturdy enough to be used with all kinds of fillings and frostings. The addition of the vanilla beans makes it extra flavorful and the thick layer of fluffy frosting makes it absolutely irresistible.

If you’re looking for a delicious, sprinkled and colorful white cake for your next party, this vanilla bean cake is your thing! 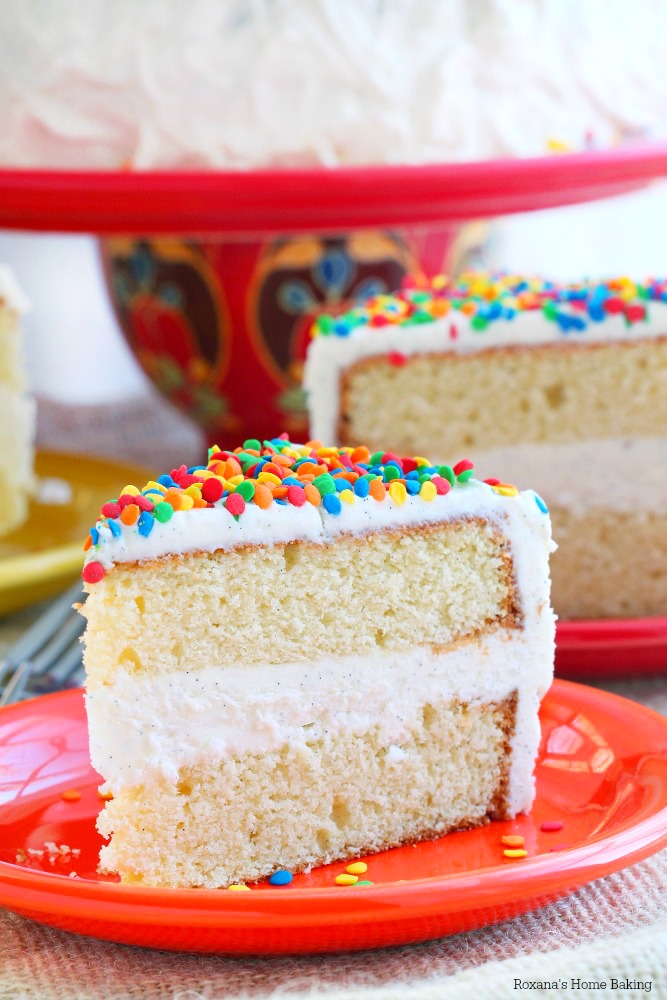 The cake is an all butter cake. Please make sure the butter, the eggs, and the milk are at room temperature. It makes mixing them so much easier.

If for the cake batter I used an American butter, for the buttercream, I highly recommend using a European butter. It’s creamier and has a deeper butter flavor.

I love the black dots in both the cake and the frosting! And the smell is amazing!!!

For the finishing touches, I used colorful confetti but you can use rainbow jimmies or rainbow nonpareils. The only advice I can give when working with sprinkles is to work in an area that you can easily clean. I place a clean tea towel under my cake plate to catch those loose sprinkles.

Everyone deserves a special treat on their birthday and this over-the-top vanilla bean cake topped with piles of fluffy vanilla bean frosting and colorful sprinkles makes your day extra special!

7.6.8
607
http://atreatsaffair.com/vanilla-bean-cake-with-vanilla-bean-buttercream-recipe/
Roxana Yawgel http://atreatsaffair.com/ All images and content are copyright protected. Please do not use my images without prior permission. If you want to republish this recipe, please re-write the recipe in your own words, or simply link back to this post for the recipe. Thank you.

If you enjoyed this cake, you may also like 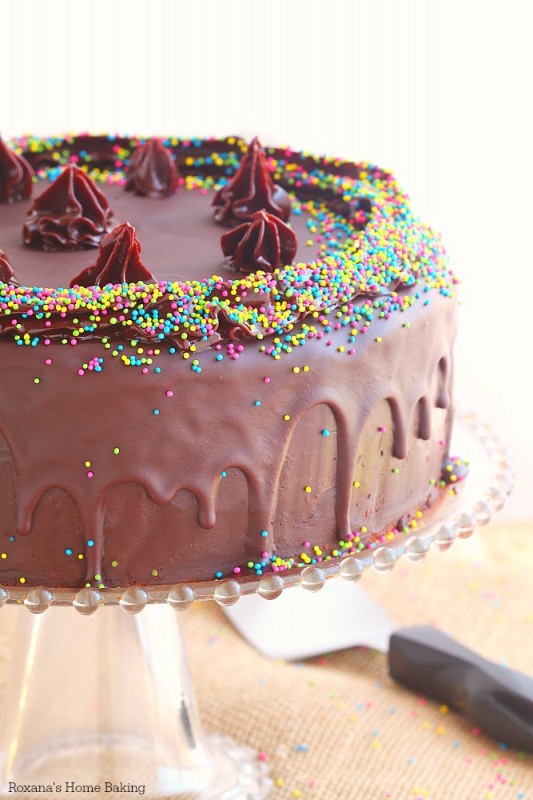 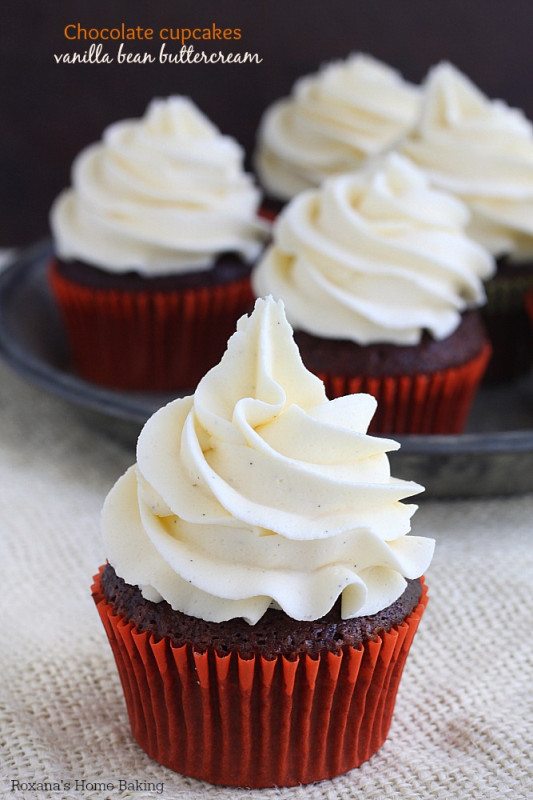